Marijuana and Hallucinogen Use Among Young Adults Reaches All Time High

Marijuana and Hallucinogen Use Among Young Adults Reaches All Time High 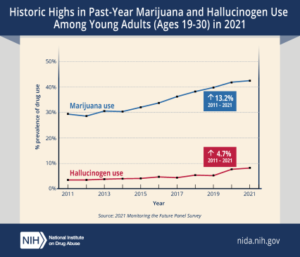 Marijuana and hallucinogen use in the past year reported by young adults 19 to 30 years old increased significantly in 2021 compared to five and 10 years ago, reaching historic highs in this age group since 1988, according to the Monitoring the Future (MTF) panel study. Rates of past-month nicotine vaping, which have been gradually increasing in young adults for the past four years, also continued their general upward trend in 2021, despite leveling off in 2020. Past-month marijuana vaping, which had significantly decreased in 2020, rebounded to pre-pandemic levels in 2021.

“As the drug landscape shifts over time, this data provides a window into the substances and patterns of use favored by young adults. We need to know more about how young adults are using drugs like marijuana and hallucinogens and the health effects that result from consuming different potencies and forms of these substances,” said National Institute on Drug Abuse Director Nora Volkow, M.D. “Young adults are in a critical life stage and honing their ability to make informed choices. Understanding how substance use can impact the formative choices in young adulthood is critical to help position the new generations for success.”

Since 1975, the Monitoring the Future study has annually surveyed substance use behaviors and attitudes among a nationally representative sample of teens. A longitudinal panel study component of MTF conducts follow-up surveys on a subset of these participants to track their drug use through adulthood. Participants self-report their drug use behaviors across three primary time periods – lifetime, past year (12 months), and past month (30 days). The MTF study is conducted by scientists at the University of Michigan’s Institute for Social Research, Ann Arbor, and is funded by NIDA, part of the National Institutes of Health.

Data for the 2021 survey were collected online from April 2021 through October 2021. Key findings in the young adult group include:

Vaping: Nicotine vaping in the past month increased significantly among young adults in 2021 despite leveling off in 2020 during the earlier part of the pandemic. The continued increase in 2021 reflects a general long-term upward trend: in 2021, nicotine vaping prevalence nearly tripled to 16% compared to 6% in 2017, when the behavior was first recorded.

Prevalence of marijuana vaping in the past month among young adults had significantly dipped in 2020 but returned to near pre-pandemic levels in 2021. Since 2017, when marijuana vaping was included in this study, past-month prevalence has doubled – from 6% in 2017 to 12% in 2021.